To Revert to the Theory of ‘Aryan Invasion’ (Part 3)

Many of the BMAC settlements have yielded remains of pottery kilns, having a lower ‘fire-chamber’ and an upper ‘baking chamber’. The pot-forms include, besides others, large carafes with stretched narrow necks, vases with long slim stems and ‘tea-pots’ with spouts. The spouts themselves show a great variety, which includes ‘long tubular’ spouts, ‘bridge’ spouts and ‘trough or channel’ spouts (Fig. 6). 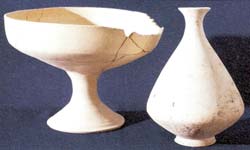 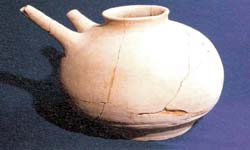 
Besides these distinctive spouted vessels, there is yet another category which calls for special attention. It is a basin or bowl having a frieze of small animals (sometimes humans as well) running along the rim. Also to be noted are serpents crawling up along the walls of the pot, both on the exterior as well as interior (Fig. 7). Although there is no conclusive contextual evidence to establish their ‘ritual association’, it has been surmised that these bowls may still have had such a use, primarily because the animal-cum-human frieze on the rims would render the bowls rather uncomfortable for the lips to directly drink a liquid from the bowls. 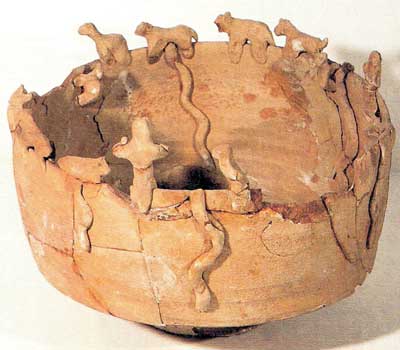 
There is a great variety of stone objects in the BMAC: for example, beads and pendants of carnelian, lapis lazuli and turquoise, carved vessels of steatite, ‘diminutive columns’ of multicoloured stones and seals and amulets of steatite.

The illustration that follows shows a cup-on-stand and a deep inward-tapering bowl of black steatite. Both these bear etched geometrical designs on the exterior (Fig. 8). 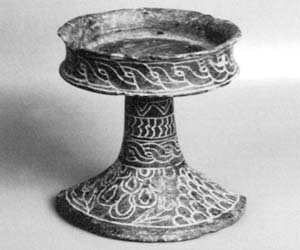 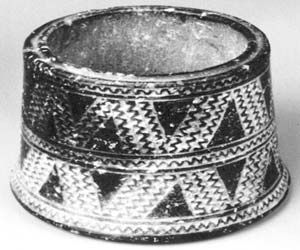 
The ‘diminutive columns’, also known as ‘dainty columns’ or ‘dainty pillars’, are generally less than half-metre in height, highly polished and sometimes provided with a vertical groove. While their exact use is debated, it has been suggested by certain scholars that these were used in some kind of ritual (Fig. 9). 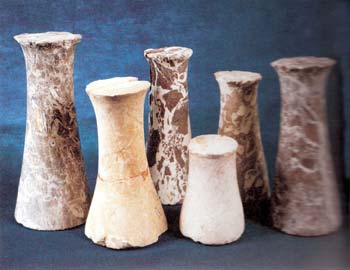