A magnificent historic temple among the ancient ruins of Hampi, India, receives a much-needed restoration. [July, 2012]
  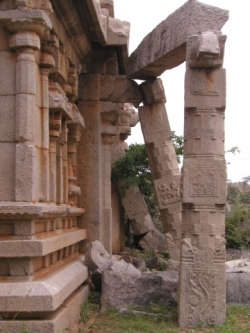 Hampi is a village in the northern Karnataka state of southern India. Located within the ruins of Vijayanagara, the former capital of the Vijayanagara Empire (from 1336 to 1565), its history hails back to the 1st century C.E.  It has been identified with the mythical kingdom of Kishkindha, the Vanara (monkey) kingdom mentioned in the hindu epic, Ramayana. Ruled by King Sugriva, the Vānara were ape-like humanoids described in the epic as possessing supernatural powers, able to change their shapes.

Today, Hampi lies within an area that boasts over 500 monuments dispersed across approximately 26 square kilometers of forested natural scenery.  Years of research have uncovered a much larger area of settlement surrounding this Hampi urban core, a broader area that supported a large population over a region of about 650 square kilometers, including forts, walled settlements, temples and religious sites, mortuary sites, canals, fields, trade routes, the remains of industrial production sites, all within a scenic watershed featuring massive boulder outcrops.

But, despite the fact that it is a World Heritage Site, it has been threatened by unplanned development, inadequate protection and seasonal flooding.

Reports the Global Heritage Fund (GHF), a non-profit organization dedicated to cultural resource conservation and development: "Conservation of historic Hampi has been underway since the end of the 19th century, but much of the conservation work has lacked proper sciences or documentation resulting in poor restoration. A great deal of work at Hampi has been piece-meal in nature and each monument has experienced a wide range of conservation techniques, many unsuccessful." [1]

Map showing the extent of the Vijayanagara Empire 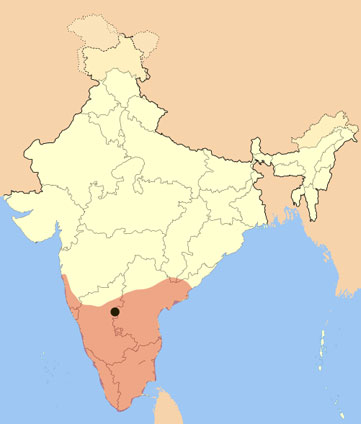 GHF has initiated efforts to help restore and develop some of the endangered structures at the site. Currently, it is focusing on the conservation of the 15th century Chandramauleshwar temple, one of the major religious features of the site, in partnership with the State of Karnataka, the Hampi Foundation and Cornell University.

“GHF is undertaking stabilization of the temple’s foundation and conservation of the walls and roofs of the main hall and other sacred chambers as well as the temple embankment walls”, reports GHF staff. “Chandramauleshwar Temple will be one of the first structures at Hampi which will be completely conserved using the latest scientific methods and the only site with an integrated ancient bridge reconstructed and useable for visitors……. Additionally, the temple will present its unique history and its conservation using the best examples of on-site museum displays based on authenticated historical research.” [1] 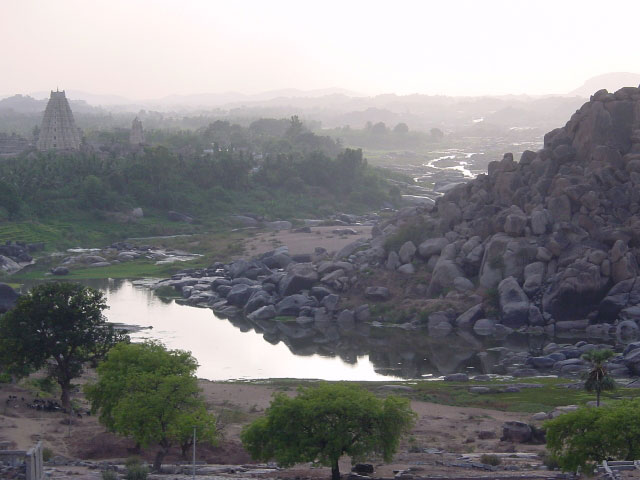 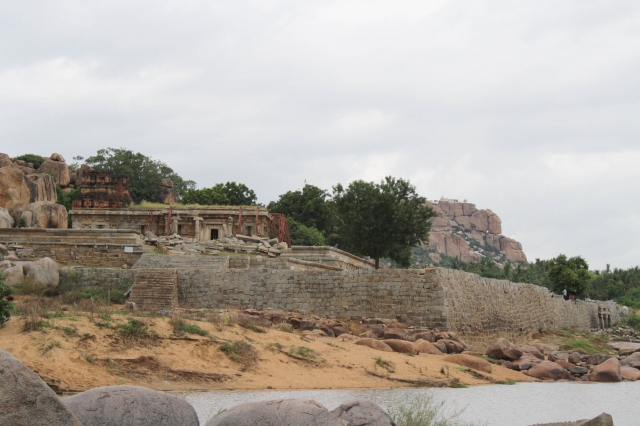 The GHF uses a development model called “Preservation by Design” to help restore cultural and historic sites. It is unique in that it fully integrates conservation and development methodologies, including long-range planning, conservation science, community engagement and monitoring and evaluation. By applying the latest or most effective methods and technologies, along with a conservation strategy through partnerships of stake-holder organizations to enhance long-term sustainability, GHF and the local communities in developing countries hope to promote local economic development by capitalizing on the strengths of their unique cultures and archaeological resources. The fruit of this approach is beginning to be seen at Hampi.

Reports the GHF: “The local community of Anegundi has supplied skilled stonemasons and other craftsmen to work on the project, as well as local boatmen who ferry people up and down the river on coracle boats. Another group benefitting from GHF’s involvement are the religious pilgrims and the religious sadhus living in the ashram on the site. Now they can access the ashram more easily as the temple steps have been reset.” [1]

GHF and conservationists are hoping that the work being done at Hampi will serve as a model that will be applied to other significant cultural sites facing disintegration or destruction throughout the developing world.

The Global Heritage Fund is a U.S.-based non-profit organization established to protect, preserve and sustain the most significant and endangered cultural heritage sites in the developing world. More about Hampi and the conservation and development work at the site can be found at http://globalheritagefund.org/what_we_do/overview/current_projects/hampi_india