Natural History of the Vedic Civilization

Unique conditions at the end of the Ice Age gave rise to agriculture in Southeast Asia. Its spread to India made the Vedic civilization possible.

Seven hundred years ago, Zhou Daguan, the envoy of the Chinese Emperor Khubilai Khan stationed at the court of Indravarman III (1295 - 1307) at Angkor, noted an unusual natural phenomenon. During the months from July to November, when the Mekong is in full spate, the Tonle Sap, its major tributary in Cambodia, reverses direction and flows back into a natural reservoir also called Tonle Sap ('Great Lake').

The reason for this is the impact of the mighty Mekong. The floodwater flow resulting from the combination of the summer monsoon and melting glaciers is so great that the Mekong overflows into the Tonle Sap channel, pushing it backwards into the lake. The lake more than doubles in size, making Tonle Sap the largest freshwater lake in Asia. When the hot season ends, the river reverses direction again and resumes its normal southward flow. The lake level also falls. 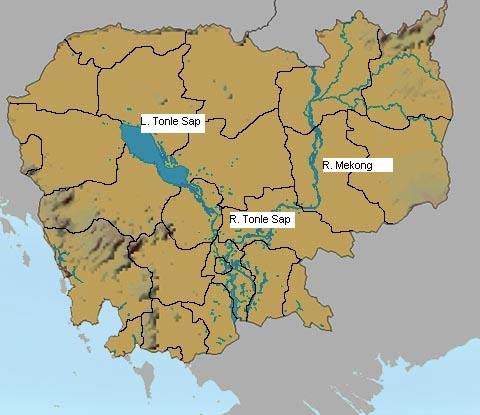 Zhou Daguan recorded that this seasonal rise and fall in the water level allowed local farmers and fishermen to harvest a variety of 'floating rice' that grew in the lake. It is a fast growing variety that germinates in deep water and grows as much 4 inches in a single day, eventually reaching a length of 20 feet. The rice always stays on the surface because its rate of growth parallels the rate at which the lake rises. In effect, nature performs 'transplanting,' a crucial step in rice cultivation. It is an example of natural selection at work- of a species adapting to fill a special niche in the environment.

It is also of great historical importance. It gives a clue as to how rice cultivation began, launching the agricultural revolution. Genetic studies show that the oldest rice species are found in the monsoon belt from the Brahmaputra to the Mekong, which includes the Tonle Sap. Wet rice cultivation was the result of humans copying this extraordinary phenomenon, in which irrigation and transplanting occurred naturally.

This forces us to revise the long held view that the agricultural revolution began in the so-called 'Fertile Crescent' in West Asia some 8000 years ago. R.E and E.H Huke of the International Rice Research Institute observe that recent archaeological evidence in North Thailand "when viewed in conjunction with plant remains from 10,000 B.C. discovered in Spirit Cave on the Thailand-Myanmar border, suggests that agriculture itself may be older than was previously thought."

The Mekong - Tonle Sap system where agriculture may have been born.

Climatic conditions at northern latitudes were unsuitable for agriculture: they were cold and arid and could not support large populations. This rules out the Fertile Crescent as the birthplace of agriculture. Natural history and archaeology both indicate that the agricultural revolution began 12,000 years ago in tropical Asia. The Tonle Sap region in Cambodia is the likeliest location.

Out of the Ice Age

Agricultural revolution was what made civilization possible. To arrive at a reasonable date for the rise of civilization, we need to know when climatic conditions turned favorable for the growth and harvesting of wild species, especially rice- the first crop to be cultivated. This happened when humans learnt to simulate under artificial conditions, as near lakes and river deltas, the natural phenomenon occurring at Tonle Sap. Post Ice Age natural history helps shed light on it.

The Ice Age ended nearly 15,000 years ago, not in one fell swoop but in fits and starts with at least two mini ice ages known as the Older Dryas and the Younger Dryas. Present conditions were reached about 10,000 years ago. Since then, the world climate has been stable. There have been fluctuations of course, but nothing like the changes that engulfed the world from 18,000 to 11,000 years ago. During the Ice Age, most of the freshwater was locked in the Himalayan glaciers. This had to end before nature could create condition so that species like the Tonle Sap 'floating rice' could blossom forth.

During the Ice Age, the great Himalayan rivers from the Indus to the Mekong either did not exist or were minor seasonal flows that could at best support small populations that subsisted by hunting, fishing and food gathering. The monsoon was also weak because low temperatures meant less evaporation. Population centers were mainly in the tropics, in tropical Asia and Africa. These were concentrated in the Savannahs in Africa and by lakes and coastal regions in India and Southeast Asia.

Communication between India and Southeast Asia was mainly by sea. Maritime activity was facilitated by the fact that during the Ice Age sea levels were nearly 400 feet lower than they are today. South Indian and Southeast Asian land mass was greater in extent and easier to navigate. A vast subcontinent, known as Sunda Land, larger than India, was submerged when sea levels rose as the Ice Age ended. These tropical lands, and not the temperate regions at higher latitudes like the Fertile Crescent were where agriculture began. This is a scientific fact.

The Vedic civilization was sustained by agriculture. What triggered the agricultural revolution was the release of the frozen waters- an event that transformed not only India but also East Asia. Temperatures rose as much as 5 degrees Celsius, melting the Himalayan glaciers in which enormous quantities of fresh water had been locked up as ice and snow. Higher temperatures also meant increased evaporation and a more vigorous monsoon. Lakes and rivers had two new sources of freshwater- melting glaciers and the abundant monsoon. Great perennial rivers burst forth from the Himalayas- Indus, Sutlej, Sarasvati (now dry), Yamuna and Ganga in North India, and Brahmaputra, Irrawady and Mekong to the east.

Of these the Sarasvati was the greatest- as the Rigveda describes, and as science now confirms. It was flowing in all its majesty from 8000 B.C. to 4,000 B.C. It began to decline about 3500 B.C. and dried up completely in the 2200 B.C. to 1900 B.C period. Considering that agriculture had been mastered in Southeast Asia-in Thailand and the Mekong region-no later than 10,000 B.C. or 12,000 years ago, the Sarasvati dates give a reasonable approximation for the Vedic period. It means that in the post Ice Age period, it took some 2000 years for agriculture to make its way from its place of origin to the Sarasvati river area. This is probably an underestimate.

This scenario is receiving increasing scientific support. River delta cultivation of rice is known both in India and further east in Asia. This means the skills needed for growing food grain were already in place 10,000 years ago, even as newer crops like wheat and barley came to be cultivated later. Genetic analysis has shown that Indian livestock-the humped bull and the water buffalo-are of East Asian origin. Indian and Southeast Asian human populations also are genetically close.

We may note here that the claim that Indians, especially the upper castes, carry European genes is unfounded. The M17 genetic marker, which is supposed to be a 'Caucasian' trait, occurs with the highest frequency and diversity in India. This means that among M17 carriers, the Indian population is the oldest. The proponents of the now discredited Aryan invasion have got both the origin and the direction of movement wrong. It is different, however, with Southeast Asian markers: their frequency in both South Indian and North Indian populations is surprisingly high. This shows extensive gene exchange between Indians and Southeast Asians.

So, on the basis of ecology, agriculture, livestock, and human populations, we may safely conclude that the seeds for the growth of agriculture and animal husbandry needed to sustain the Vedic civilization existed by 10,000 B.C. The long-standing maritime connections between India and Southeast Asia going back to the Ice Age facilitated the transfer, beginning with river delta cultivation, once humans mastered the skill of reproducing the phenomenon that occurred naturally at places like Tonle Sap.

To understand the origins of Vedic civilization, we need to recognize that India and East Asia-the monsoon belt between the Indus and the Mekong rivers-form a single ecological and cultural zone. It is dominated by two natural forces- Himalayan glaciers and the summer monsoon. The easiest means of communication has always been by sea. A second line of transit was a more difficult land route running north through Thailand, Burma and Assam. Expansion along this route was facilitated by the practice of 'slash and burn' agriculture, in which large tracts of forest are burnt down for cultivation. This forced people to be on the move in search of new forest, because it takes several decades for the burnt forest to regenerate. This was probably how agriculture and livestock spread to parts of India from its origin in the east, near the Mekong region. It accounts also for the close biological connections between the species of the two regions.

Civilization, of which the Vedic is the oldest recorded, is a post Ice Age phenomenon. It was made possible by the forces of nature that the calamitous ending of the Ice Age unleashed. This has been evolving not for centuries but over more than 10,000 years- from the birth of agriculture in a peculiar ecological niche to the present day. It shows that no civilization evolves in isolation. Our genes came from Africa, agriculture from Southeast Asia and modern technology mostly from the West. India too contributed many important things- from mathematics to metallurgy.

Ultimately it is nature that makes everything possible. She is her own mistress and chooses her own place and time to unleash the forces that bring about momentous change. History is only an extension of natural history.

This Article Reprinted With Permission of Author

N.S. Rajaram is a scientist and historian. He is currently working on the book Mekong to Indus: A natural history of Vedic India.