To Revert to the Theory of ‘Aryan Invasion’ (Part 4)

The BMAC settlements, including graves, have yielded a large number of metal objects, mostly of bronze / copper but sometimes of silver and gold too. Here we illustrate two very distinctive axes. On one of these there sits a human figure at the butt-end, whereas in the other case that position is occupied by an animal (Fig. 10).

However, much more remarkable is an axe, made of silver but covered with gold lamina. The decoration showing a winged feline and heads of two eagles would appear to have had some mythological import (Fig. 11). It also seems most likely that this axe was not used for cutting wood or for a similar purpose but may have been ceremonial in nature – perhaps mounted on a specially made staff and held by a person in authority, as a mark of his position. 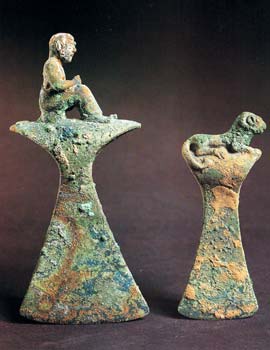 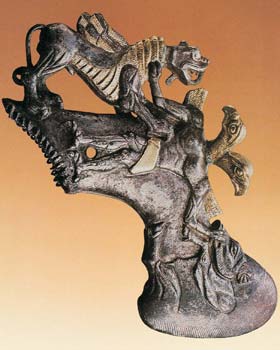 Though we have already dealt with objects of stone and metal and with ceramics, we discuss here separately the art of sculpting in stone, metal and earthenware, since these objects throw valuable light on the artistic acumen of the BMAC people and demonstrate how very individualistic was their art-style.

Here is a stone sculpture of a seated lady from Bactria (Fig. 12). In order to bring out the contrast in the portrayal, the sculptor has chosen a blackish stone for the dress with which the major part of the body is covered, but a pinkish white one for the head and hands. Also to be noted are not only the herring-bone weave (decoration) of the garment, but also the details in depicting the hairstyle. 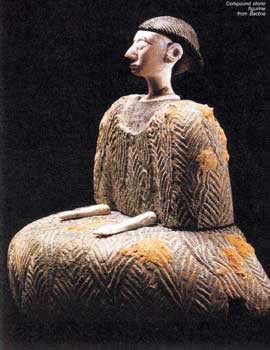 It is not just the human beings that attracted the attention of the BMAC artist, but the animal-world as well. And here are two objects, both from Bactria, one depicting a feline (Fig. 13) and the other a goat (Fig. 14). 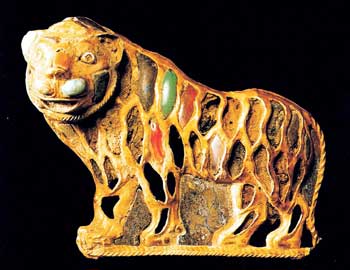 Fig. 13. Chlorite and gold leaf representation of a feline,
with semiprecious stone inlay.

The gold leaf and inlay-work in the case of the former are indeed superb and so also is the choice of coloured stones in the case of the goat, namely lapis lazuli for the horns, eyes and beard and limestone for the rest of the body.

Though termed as ‘the poor man’s medium’ of art-expression, the earthen sculptures are no less remarkable. Take for example, the following figurine from Gonur Depe necropolis in Margiana. It has a slender neck, aquiline nose, prominent eyes, arched eyebrows, receding forehead and a very distinctive headdress (Fig. 15). 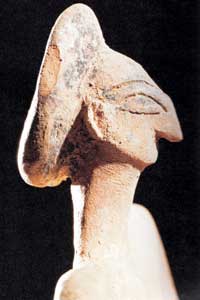