To Revert to the Theory of ‘Aryan Invasion’ (Part 6)

It has been claimed by certain scholars, including Sarianidi, that the BMAC people were the forebears of the Iranians and Indo-Aryans. This conclusion seems to have been drawn primarily on the following four counts: viz.

(i) fire-worship temples of BMAC;

(ii) supposed use of soma / homa in BMAC rituals;

(iii) mistaken identity of a horse’s skeleton as evidence of the asvamedha; and

We shall now examine, though briefly, the evidence in respect of these four claims.

It has been argued that the BMAC temples were devoted to fire-worship and that since this kind of worship constitutes the main religious base of the Zoroastrians, they and the BMAC people shared a common ancestry. This is what Sarianidi says (1993a: 679) in this context: “A building unearthed at Gonur temenos and conveniently called a fort has a cross-shaped general plan with twelve corner towers. It most closely resembles the outer contours of the indisputable fire temple at Tepe Nush-i-Jan. A difference of minor importance only consists of the fact that while the towers are round at Gonur, they are square at Tepe Nush-i-Jan” (Fig. 20). But he immediately admits the weakness of the comparison by stating: “Unfortunately, the fort (at Gonur temenos) appears to be unfinished so we do not know its inner construction, but apparently it too was a fire temple.” What is the great point in forcing such a comparison when the evidence itself so weak? 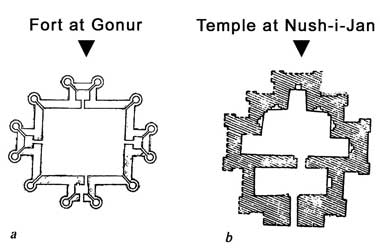 In order to show that the Indian subcontinent was also involved in such a fire-worship, Sarianidi adds (ibid., p. 676): “An example is the fire temple in the lower town of Mohenjo-daro; its basic plan comprises a ‘courtyard encompassed by corridors’ (Dhavalikar and Atre 1989)” (Fig. 21). 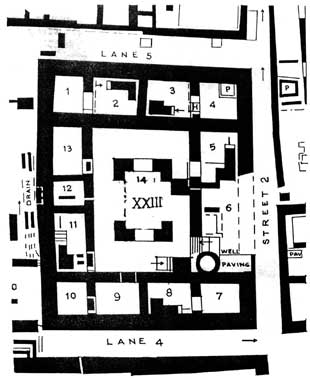 In their article, Dhavalikar and Atre have gone into a series of conjectures, there being no down-to-earth evidence for actual fire worship in that complex. On the contrary, Marshall (1931, Vol. I: 202) takes this structure to have been a normal residential house. But in his desperation to bring India as well into the orbit of a Zoroastrian kind of fire worship, Sarianidi has completely lost sight of the fact that the house-complex at Mohenjo-daro belongs to the Indus Civilization of the 3rd millennium BCE whereas the BMAC is much later, dated to the 2nd millennium BCE. Thus, if at all the comparison made by Sarianidi is accepted, the direction of movement will have to be from India to Central Asia and not vice-versa!

It has been claimed that there occurred the remains of ephedra and poppy in the temple of Togolok-21 in Margiana and since ephedra has been thought to be identical with the soma / homa of the Rigveda / Avesta, the BMAC people must have been the ancestors of the Indo-Iranians. There are two snags in this thesis. In the first place, not all experts agree that soma / homa is nothing but ephedra. But what is more important is that Harri Nyberg, a well known authority on the subject, after a thorough examination of the Toglok evidence, writes (1995: 400):

... remains of ephedras have also been reported from the temple-fortress complex of Togolok 21 in the Merv oasis (ancient Margiana – Parpola 1988; Meier-Melikyan 1990) along with the remains of poppies. ... In 1990 I received some samples from the site [forwarded by Dr. Fred Hiebert of Harvard University] , which were subjected to pollen analysis at the Department of Botany, University of Helsinki. .... The largest amount of pollen was found in the bone tube (used for imbibing liquid?) from Gonur 1, but even in this sample, which had been preserved in a comparatively sheltered position when compared with the other investigated samples, only pollen of the family Caryophyllaceae was present. No pollen from ephedras or poppies was found and even the pollen left in the samples showed clear traces of deterioration (typical in ancient pollen having been preserved in a dry environment in contact with oxygen). Our pollen analysis was carefully checked for any methodological errors, but no inaccuracies were found.

The discovery, in the cemetery area at Gonur, of the skeleton of a horse, with its head missing, has led Sarianidi to postulate that it is a case of the Asvamedha (horse sacrifice); and since the Asvamedha is a ritual mentioned in the Rigveda, he argues that the authors of the Bactria-Margiana Archaeological Complex must have been the ancestors of the Rigvedic Aryans.

Before we examine the validity of such a conclusion, let us have a look at the photograph of the skeleton, published by Sarianidi himself (Fig. 22). 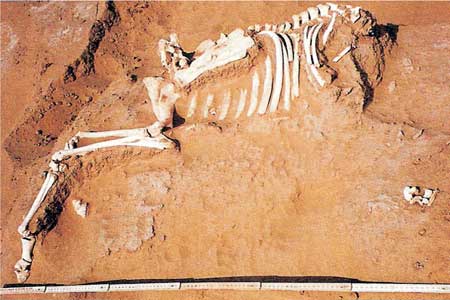 It would be seen from the photograph that there is no clear outline of a pit in which the horse is supposed to have been regularly buried. Further, the skeleton lies hardly a few centimetres below the ground-level. Thus, there could have been many other reasons for the head to be missing, such as erosion through natural agencies or subsequent human interference.

And no less important is the fact that the skeletal remains do not conform to the manner in which the horse had to be sacrificed in the asvamedha.

There are two Suktas in the Rigveda, viz. 1.162 and 1.163, which are devoted to the Asvamedha and lay down how the horse, tied with ropes and accompanied by a goat, had to be taken to the sacrificial altar and then, after some rituals, had to be sacrificed. I quote below two of the verses, viz. 1.162.18 and 1.162.19, which are very relevant here.

“The axe penetrates the thirty-four ribs of the swift horse, the beloved of the gods, (the immolators), cut up (the horse) with skill, so that the limbs may be unperforated and recapitulating joint by joint. (18)

“There is one immolator of the radiant horse, which is Time: that are two that hold him fast: such of thy limbs as I cut up in due season. I offer them, made into balls (of meat), upon the fire.” (19)

The foregoing description makes it abundantly clear that in the case of the asvamedha the horse had to be cut up into parts, ‘recapitulating joint by joint’.

There is hardly any evidence of such a cutting up in the case of the horse’s skeleton discovered at Gonur. Then why be so imaginative as to call this skeleton as evidence of the asvamedha and thereby draw an uncalled for conclusion that the BMAC people were the ancestors of the Rigvedic Aryans ?